Datapoint TTL has always been the black sheep of the Intel family.

The very first x86, Intel compatible logic board used a Datapoint 1201 chipset not made by Intel. . This is the TTL implementation done for the world’s first microcomputer the Datapoint 2200. It has four early production Intel 3101 memory chips that provide an interconnect for simple shift register memory also supplied by Intel in large quantities.

Recently arrived in the lab is a Datapoint CPU board with 6947 date code on four blue memory slots each flanked by an Intel 3101 static memory chip – Intel’s first product from 1969. Fleetwood Mac was just climbing the charts when these babies were made. 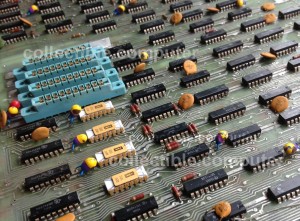 In the first year of Intel’s operation memory chips were a priority over microprocessor design. The 3101 you see in the picture is Intel’s very first product having gotten done 8 months after the company’s founding. Intel then contracted with Computer Terminal Corp. to design a microprocessor called the 1201.

Two ex-NASA engineers at Computer Terminal Corp were fresh off a success with their 3300 terminal and wanted something with an “improved control unit” according to their business plan.Enter Intel and Texas Instruments pitted in a battle to develop the world’s first 8-bit microprocessor.

Both built the 1201 CPU for the Texans but in one of the biggest business blunders in history CTC did not secure the rights to the CPU for a mere fifty thousand dollars. They could have easily owned Intel at that point.

Instead the company rushed out our board in the pictures using TTL (transistor to transistor logic). It was actually quite fast. But thanks to the design’s inability to access memory directly through the blue “69” slots we have this stunning gold 3101 four-banger. The first x86 compatible in history.

Intel sent its main salesperson out into the field in the summer of 1971. He reported back that there was some tepid interest in the 1201 which Intel renamed 8008 to fit with the entirely incompatible 4004. But more on that later. 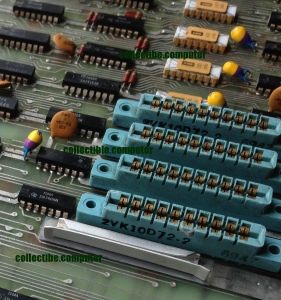 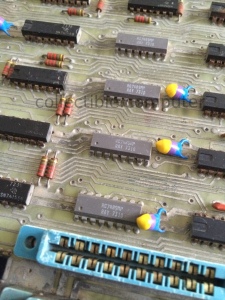 Intel’s CPU voltages continued to be hamstrung by Datapoint’s original 15V design creating a major opportunity of ex-Intel designer Faggin to create the Z80, a superior 8-bit design that required only 5V. Zilog rocketed to the top of the 8-bit heap but was quickly at a dead end with 16-bit. 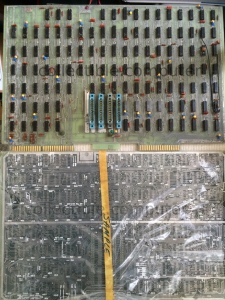 Victor Poor completed one of the key milestones in computer evolution over thanksgiving weekend 1969 – 8008 logic on his living room floor! 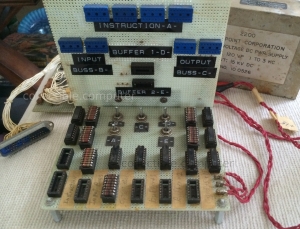 The 15V leads and proprietary Datapoint connector (3300) tie it to Victor Poor’s early R&D department. The spelling of “Buss” is old school Navy electrical buss not the more modern spelling referring to a modern Data “Bus” although it is impossible to tell which engineer did this unless the handwriting is recognized.