Microsoft in March, 1987 was very much a work in progress creating a multimedia strategy.   Bill Gates joined in a standing ovation for Art Kaiman and a team from RCA  as they demonstrated the first video standard for PC called Digital Video Interactive at a second annual CD-ROM conference.  The team’s demo was on a “full height” CD-ROM, using a 6-MHz Intel 286, IBM AT running MS-DOS.

According to John Dvorak, Gates was annoyed by being frozen out of the release date of the first CDi products.  Kaiman told the press, rather diplomatically,  “I can’t say this is a CDi killer.”  Eventually, the product Intel called Actionmedia went on to win Best of Show at Comdex 1991 on both Windows and OS/2.

In the 1940’s RCA introduced the famous RCA jack as a way of connecting a phonograph to their radios.  In 1942 RCA opened what was to become the RCA Sarnoff Labs named after company and NBC founder David Sarnoff – inventor of color TV, VCR and even the first CMOS CPU, COSMAC for the U.S. Space program.  Kaiman was Director of Digital Products for the lab. 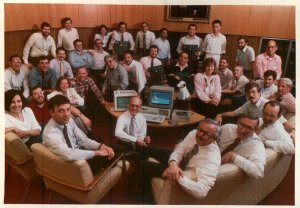 Kaiman (closest to bottom) before Intel bought DVI and moved the team to the new Princeton Operation. 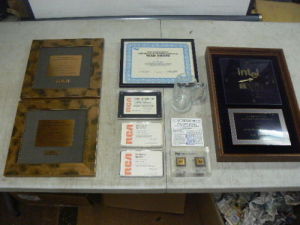 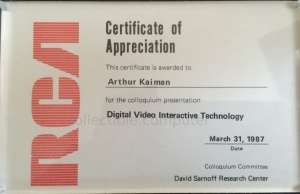 In the same month as the DVI Demo for Gates, Kaiman gets an award for DVI merit. 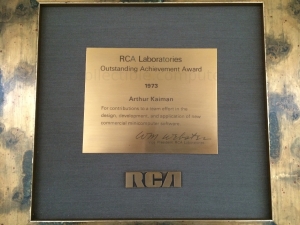 Stamped signature of Dr. William Webster.  Webster joined RCA in 1946 after getting a degree from Union College, next door to the G.E. Homestead in Schenectady, N.Y.   He went on to be a thorn in his neighbor’s side holding patents in television, vacuum tubes, gas tubes, circuitry, and semiconductor devices. 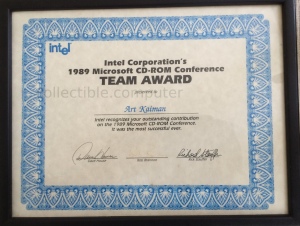 Personally Signed by Mr. “Intel Inside” Dave House.  Rick Stauffer, marketing manager at PRO, was loosing the standards battle to Quicktime and MPEG by 1992. 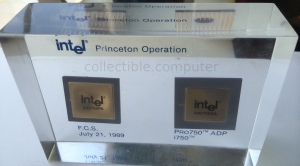 First i750 chip-sets “W #12″.  These packages look empty but the MMX they inspired packs a lasting punch. 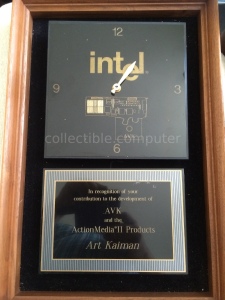 Time ticks down for Actionmedia II ostensibly because of high costs for both consuming and producing DVI video . 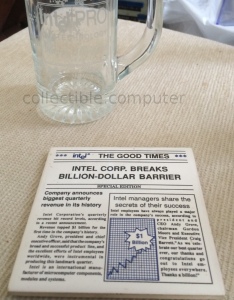 In 1993 the Intel  Princeton Operation (PRO) was finally closed relocating some but ending the role of Art Kaiman .  Although DVI was ultimately not successful it paved the way for other formats like AVI that have made the PC a multimedia powerhouse.

IBM PS/2 Ultimedia Model 57 SLC and 77s are based on DVI technology.  These originally included the $2K Actionmedia II board. They can be identified by front audio jacks and an early PS/2 CD-ROM drive.  Also look for DVI and Ultimedia logos.