As the Apollo guidance computer was landing Neil Armstrong on the moon two ex-NASA engineers were landing the PC on user’s desktops.   Ex-Navy radioman Victor Poor did the logic for what was to be renamed the Intel 8008 over Thanksgiving weekend.  A pre-PC product called the Datapoint 3300 (100 times better than the model 33 teletype) was shipping with early programmability features.

“The cursor can optionally be programmed through the computer.” – Modern Data magazine review of Datapoint 3300.  The unit has two compact “friends” in a 3300P printer and 3300T cassette tape.

Mad Men style marketing was in fashion complete with mini dress clad models looking attentively at smart bosses.  The price was also going down rapidly with the 3300 selling for $5K.  Ads  promoted the local functions as well as traditional time sharing.

The “improved control unit” got a new name in 1969 but the  microprocessor would have to survive its first spectacular failure.  A pre-PC called Viatron showed that government adapted  technology made a poor transition to low cost, mass produced computers.

According to its wiki Viatron Corp. gets credit for coining the term microprocessor.   On my wishlist was to someday look past the Datapoint 2200 – to someday collect parts of absurdly rare and eccentric Viatron System 21XX.    Thanks to some record Boston snow that day came much sooner than l expected!

The discovery of Dr. An Wang’s  “7-board” personal Viatron System 21 was  by accident sitting at Applebee’s Restaurant checking texts. I made contact with a former Wang employee during one of Boston’s snowiest winters on record.  He claimed to have possession of a dissected Viatron given to him by Dr. An Wang.

Wang was a MA neighbor of little known Viatron Corp.  Working from an Air Force AESOP concept for small interconnected devices that would let an end user take control of a smart terminal complete with built in software anyone could understand.  According to a published roll out plan the company promised they would start handing out in Boston in September 1969 for an amazingly low rental price of $39 per month.

After scanning An Wang’s autobiography for clues on how this device shaped his thinking on computers I can conclude that he initially wanted nothing to do with the word “computer” but everything to do with revolutionizing office productivity.

Viatron was up against nearly impossible odds for making this machine work.   MOS semiconductor maker AMI convinced the company president to send them research dollars.   The company also spent money to make a “Printing Robot” keeping true to the initial Air Force spec of having a typewriter as part of the system.    Wang’s System 21 has the optional  printing robot!

According to our source from Wang, Viatron made only 25 working units – losing over one million dollars per unit in investor funds.  A raging lawsuit followed the ousting of the CEO over dinner at his home and ensuing corporate bankruptcy.   AMI was listed in the complaint – American Microsystems International not the AMI builder of modern PC BIOS.

Our Viatron has dual tape controller boards.  Not even twins even though they have the same assembly codes.   The boards have what I consider a struggled design.  The bus function is appended on crude daughter boards.  Another illustration of the massive product problems the company faced.  Also a Viatape drive and tape cassette produced by an outside company for Viatron seems to be of a much higher quality design.

While Viatron’s terminal product got done for the glossy brochures the computer option was a complete failure.

Close-up of 2-bit memory board. 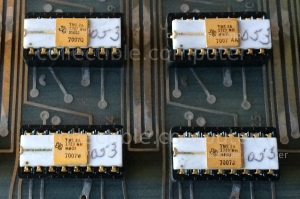 The 3300 is an early adopter of the inexpensive 7400-series control logic from TI introduced in 1966.   The technical reference manual is one of the few small device references to include a compete logic diagram of the system control unit.

The modern microcomputer owes its existence to this 1969 great grandaddy of tech.    Once the data communications side had been ported to a “green screen”  the industry broke wide open for Intel and others to perfect and expand. 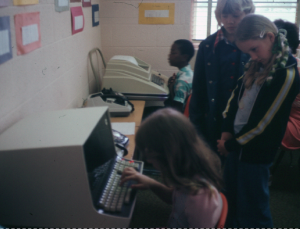 NAND gates would find their way into 8008 logic done by Victor Poor in that same year these were shipped.  IBM’s unofficially supported Conversational Programming System competed with local functions but ran in emulation mode.

Our typewriter footprint 3300 is in top condition  and even lights a red toggle for “local mode”.  With preliminary text handling capability desired most by TTY operators this unit can cut but not yet paste.

In a popular Modern Data rundown of interactive terminals we find “the cursor can optionally be programmed from the computer” on the 3300.  Additionally the 3300 has a small printer 3300P and Phillips made tape cassette 3300T.